Do you know that many people believe that the North is the worst Vastu direction for sleeping because that’s where the elephant’s head was when Lord Shiva got it cut for Ganesha? 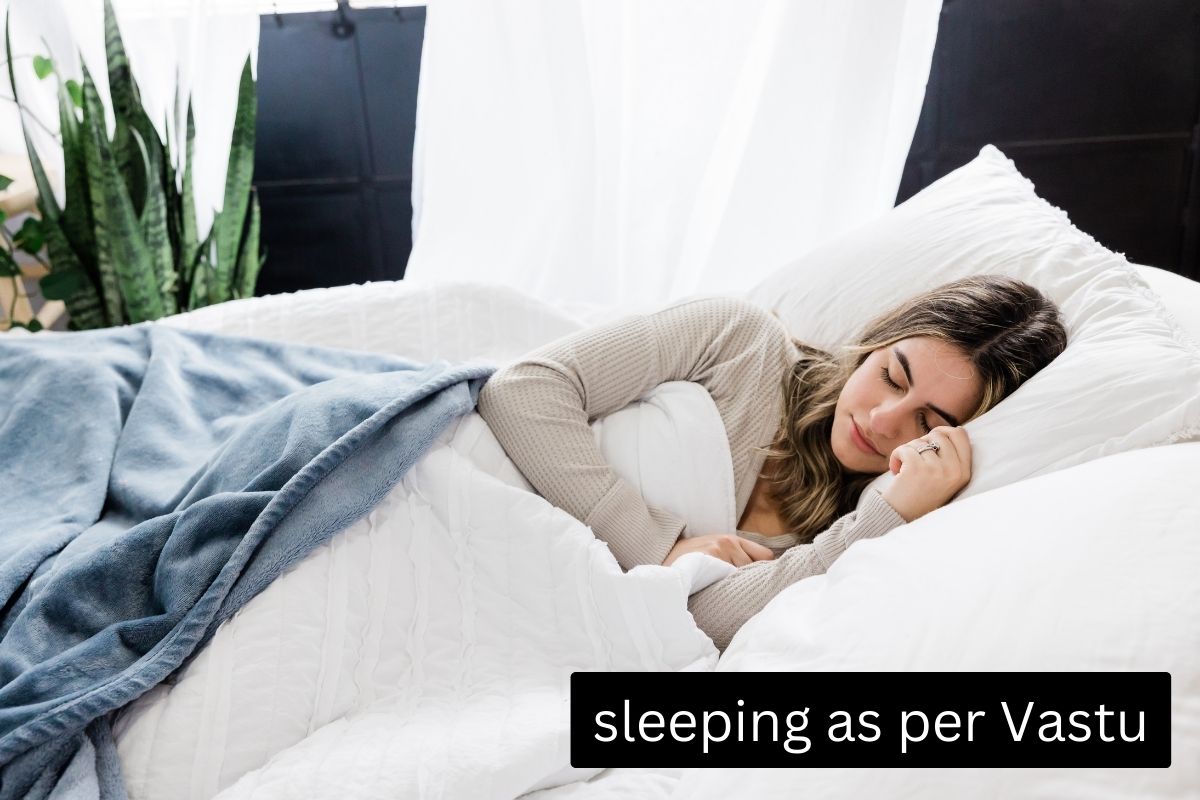 It's also said that the South is the direction of Yama - the god of death, and if we disrespect him by pointing our legs in his direction (which happens when our head is in the North), our life will end.

Now we would never know how true these stories are, but letting them create fear in us doesn’t seem good.

To get rid of the fears and also get the benefits, we need to see whether it's a superstition or if there is some science behind this concept.

In this article, we’ll find out the correct sleeping direction according to Vastu and in which direction to keep our head while sleeping. We’ll also talk about why the wrong direction is wrong and end the article with some bonus Vastu tips to sleep better.

Before we talk about sleeping as per Vastu, it is crucial to comprehend how magnetic fields and other electromagnetic energies affect our health.

You should know that both our planet and the human body have magnetic poles.

The positive and negative magnetic poles of Earth are located respectively in the North (Arctic area) and South (Antarctica area). And in humans, the head is north, and the feet are south.

Sleeping in a direction like the North can cause the two positive poles to repel one another because of the Earth's magnetic pull.

A force gets produced when two positive poles come together. This force can lead to neurological disorders, sleep disturbances, and other health problems. Sleeping with one's head in the north can even hinder the recovery of those fighting a long-term, serious disease.

Additionally, it's typical to detect stress, headache, anxiety, high blood pressure, and other health issues in those who sleep in the north. Because of these numerous harsh side effects, resting with your head in the north receives a big No from Vastu experts.

You should also know that in the Hindu religion when people die, their bodies are laid down in such a way that the head is in the north. That way, Yama - the god of death (in the south) can easily pull out the person’s soul from his body through the legs.

If both of these explanations are not convincing you enough and you still want to sleep with your head in the north, you can start an experiment.

Note: North is not an ideal sleeping direction as per Vastu in countries in the northern hemisphere. These places include India, Japan, North America, and Europe.

If you live in the southern hemisphere, i.e., near Australia, South America, South Africa, Argentina, etc, the rules mentioned in this article are opposite for you. North, in that case, would be ideal to sleep in, and the south would be wrong.

Why is that, you ask? Because the winds flow from west to east in southern hemispheres, but east to west in the northern. Know that the Wind is one of the core elements in Vastu (called Vayu) and it’s direction plays a major role.

Sleeping Directions According To Vastu

Sleeping As Per Vastu In The East Direction

East is an empowering direction. With its immense positive energy (thanks to the sun rising from the east) it rejuvenates you and increases your focus, memory, and concentration.

You see, the planet rotates from west to east, the winds thus flow from east to west, taking the healing energy of the sun with them. (2) The healing wind helps balance the body’s functional energies or doshas (Vata, Pitta, and Kapha), which amps up your health.

Good quality sleep, better health, and improved brain functions like memory and concentration, help you speed up your growth in life. That’s why the east is one of the best places to sleep as per Vastu.

Sleeping As Per Vastu In The West Direction 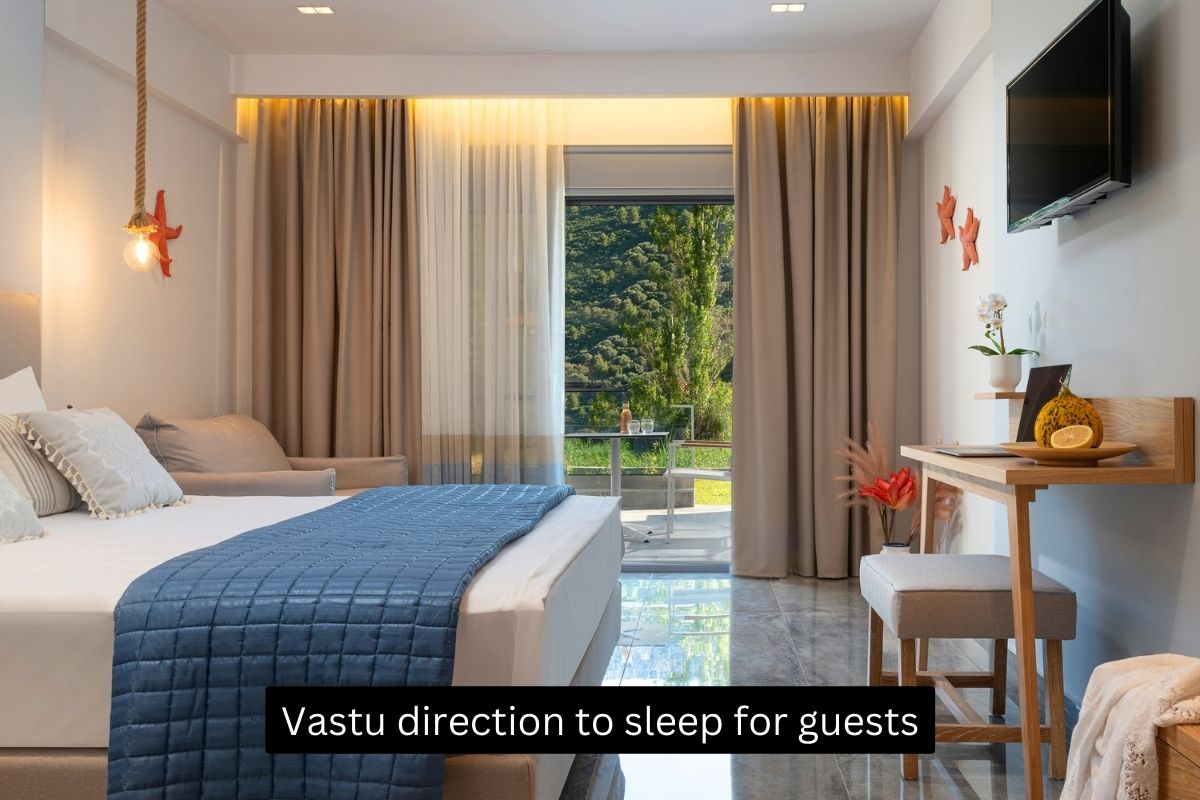 West is often the choice of Vastu direction to sleep for guests. Because the average person doesn’t want their guest to get too comfortable in the house and stay longer than they should.

However, if you cannot fix a bed in the east or south, the west would be your next best option. Also, if you are ambitious and inclined towards success, sleeping in the west can help. To some people, this direction can bring them more wealth and opportunities.

So, if you want success, keep your head in the west and your feet pointing to the east.

What’s The Best Direction To Sleep According To Vastu?

The ideal Vastu direction for sleeping is the South. To make it clear, ideally, your bedroom should be in the south of your house.

Sleeping in this direction relaxes you fast, and you sleep better. That means your body produces essential hormones and takes care of your metabolism. With balanced hormones, you can prevent issues like diabetes, PCOS, and thyroid.

Deep sleep also helps take care of your emotional and mental health. It makes you productive at work, and because of this, you can bring more money, abundance, and happiness into your life. 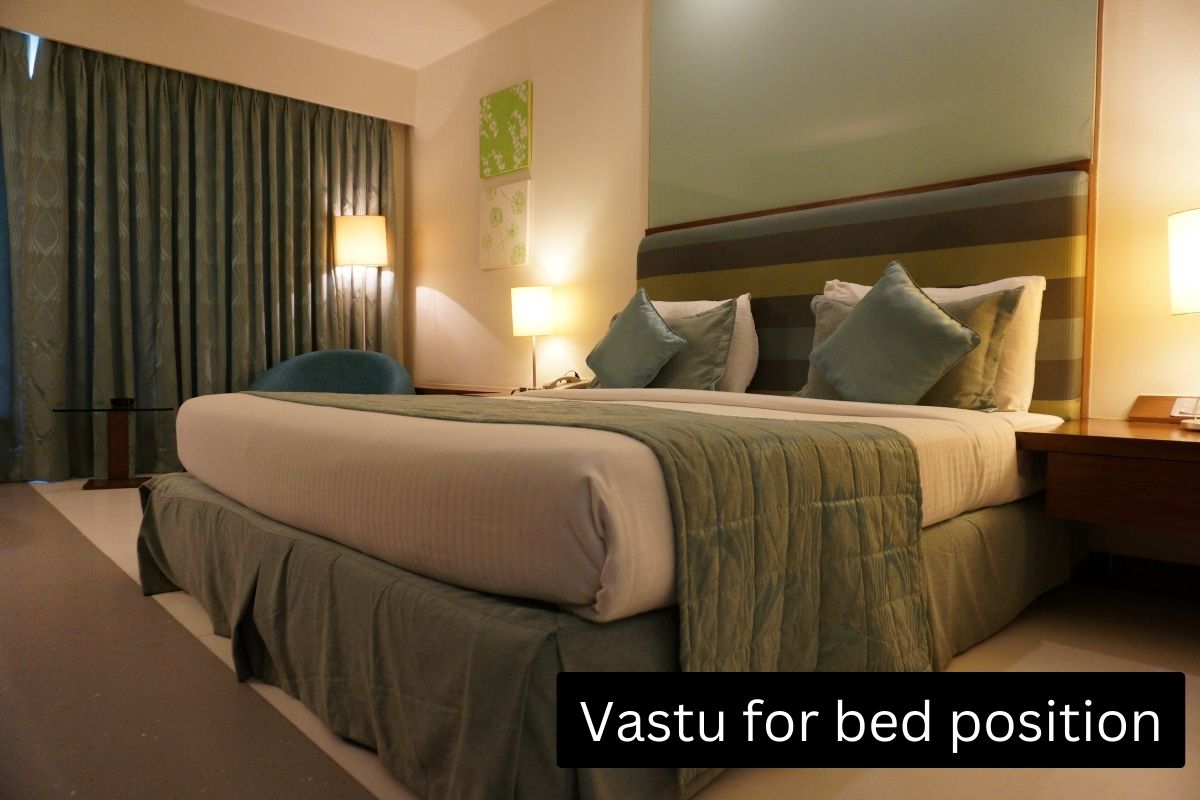 According to Vastu for bed position, your head should be in the south, and your legs should be pointing north.

How To Sleep As Per Vastu - Vastushastra Tips For Good Sleep

Do you always find yourself struggling for a sound sleep? If Yes, read further to program a nice peaceful sleep for yourself.

Now you know in which direction we have to sleep and what to do to make your sleep high quality.

But do you want to find the best sleeping position according to Vastu for yourself?

Consult an expert, and they will find the best direction for you according to your goals and astrological charts.

Under the proper guidance of professional Vaastu experts, each direction in the house can be used to yield its best possible attributes. We unknowingly create problems for

Which is the best direction for head while sleeping as per vastu shastra?

As per vastu shastra, the best and most ideal direction while sleeping is “Head pointing towards South direction".

What is the best direction of master bedroom?

Is it good to sleep under a pillar beam according to Vastu Shastra?

It is not recommended to sleep under a pillar beam as it may lead to health concerns over a longer period of time.